Jennifer Mercer (US) was elected to a three-year term as chair of the Forum of Arctic Research Operators (FARO) at the FARO Annual Meeting held 18 June at the Polar 2018 Conference. Jennifer is from the US National Science Foundation’s Office of Polar Programs. She manages programs in Arctic research support and logistics and in Arctic observing. Jennifer is replacing James Drummond (Canada), who has led FARO over the past three years up to FARO’s 20th anniversary this year.

In accepting her new role, Jennifer Mercer thanked James Drummond for keeping momentum in FARO during his presidency and said it was an honor to be nominated and elected for the position as FARO Chair. Jennifer expressed a keen interest to get to know each FARO member even better, and she looks forward to leading the activities and lively discussions in FARO that will contribute to the next generation of Arctic infrastructure operations.

New members for the FARO Executive Committee were also elected at the meeting. The committee now consists of: 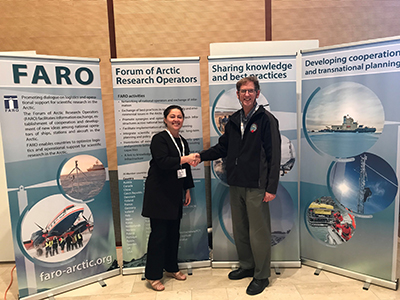 James Drummond (Canada) handing over the role as chair of FARO to Jennifer Mercer (US).